Customizations are optional. These settings may be changed any time without risk to your data.

Touch on the Settings button from the Home screen. Next, touch Customization. 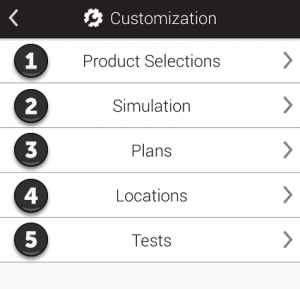 Touch Tests (as shown at 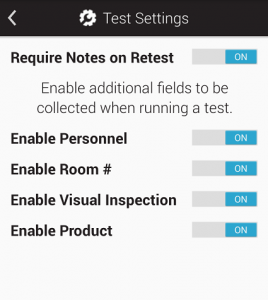 From this screen you can enable additional custom fields you want to use when conducting a test or quick test. These are helpful if you would like to capture extra information during test time such as personnel, room #, or product.

Personnel are not the same as unit users! Personnel are the people performing the test(s). You can select or create them on the test screen when this feature is toggled on. If a user on the unit is also going to be performing tests you would create them as a personnel as well. This is very useful if people performing tests don’t necessarily need to use the device for any other function as a user might. These people probably don’t need to mess around with other buttons on the unit and their sole use of it is just to conduct the tests before passing it off to an actual unit user who manages the device or does more with it.

Visual Inspection is a useful feature when a trained eye is also required before a test is labeled a pass or fail. This is also useful if notes need to be added when a test is taken to add further information about how it was conducted or what is observed during or after the test.